Horn enlists the help of locals for Burdekin anti-bullying program

It's not often a former world champion gives you tips on how to prepare for battle. But that's precisely what happened for a group of young boxing fanatics and committed community members when Jeff Horn came to town last week. 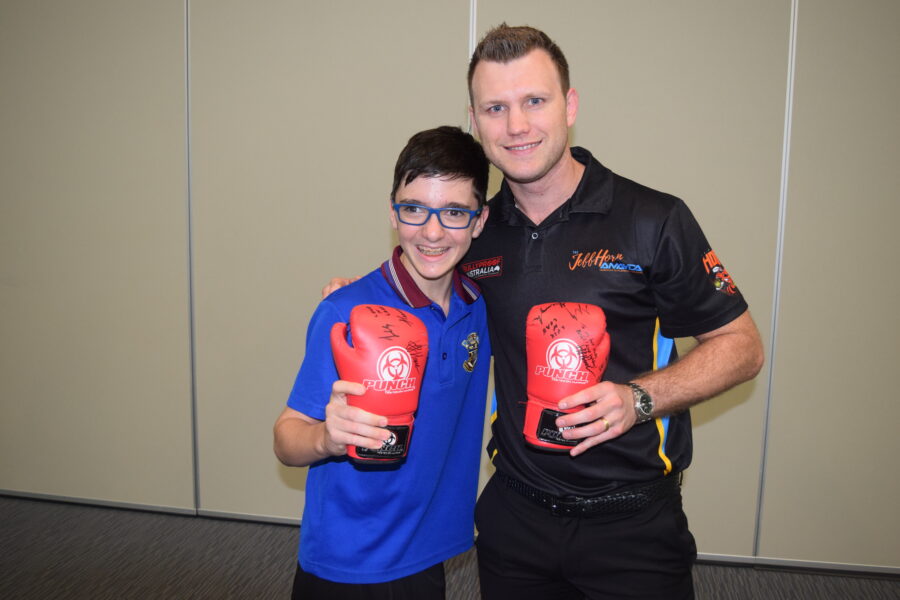 The man who bested Pacquiao, Zerafa and Bailey may have been in Ayr to kickstart the launch of a local anti-bullying program; still, he gave plenty of time to the Burdekin PCYC’s young boxing students, helping them with tips on weight-cutting, diet and nutrition.

“It’s great to be able to be here and to be able to talk to young boxers like that, other people, they look like great, fit kids, and I feel like they need that information early to get better,” Horn said.

“We don’t want to see anyone stunting their growth, so I think it’s important to try and share that information that’s going to help people.”

Aside from boxing tips and handing out plenty of signatures, Horn also provided information in the battle against bullying, hoping to lead the fight against the scourge that drove him first to take up the gloves.

“It’s the most important time of their lives to get this kind of information,” Horn said.

“It’s good to have this many people interested in the program. It’s making waves, which it should; we’re really the only program that is doing this sort of thing, getting in front of the kids and training them with the resilience and confidence that they need.”

Thanks to the generosity and community spirit of eight local businesses, the visit was made possible, with the group banding together to raise $24,000 to bring the program to life.

David Cox of Davco Farming was one of the key minds who made it happen. Robert Oar joined him from Rural Quip, Lew Brandon from Brandon BMS, Jason Guy from Burdekin Tyres, Peter Carcary from Honeycombes, Gary Furlong from Furlongs, George Populin from Populin Builders and Richard Bonato from Razer electrical.

All of the businesses donated $3,000 towards the goal, with the hope of eradicating bullying from the Burdekin.

To that end, Horn said the fast-growing Martial Arts and combat sports community in North Queensland would be one of the most significant assets leveraged by the AMAYDA team.

“We need the locals to get involved with the program, to be the ones who are going to implement it, we’ve got trainers to come to train the people who’ll do the program,” Horn said.

“Martial artists, boxers, they’ve got all the basics that we revolve the program around anyway in self-defence and in school, we work with that for the kids.”

The program and the Jeff Horn Community Hub in the Burdekin that will launch alongside it will cater to 100 local children over the first year of its operation. Youth Development Mentor Tracey Booth will administer them.

It’ll run out of the Burdekin PCYC, where the children participating will learn about self-defence, negotiation and ways to boost their confidence while role-playing through different scenarios.

To find out more about the Jeff Horn Community Hub or learn about the program, head online to www.amayda.com.au or ring 1300 262 932.