Birri Gubba Juru elder, James ‘Jim,’ Gaston is no stranger to the sea, having worked to protect and monitor sea turtle species off the coast of Bowen for over thirty years. 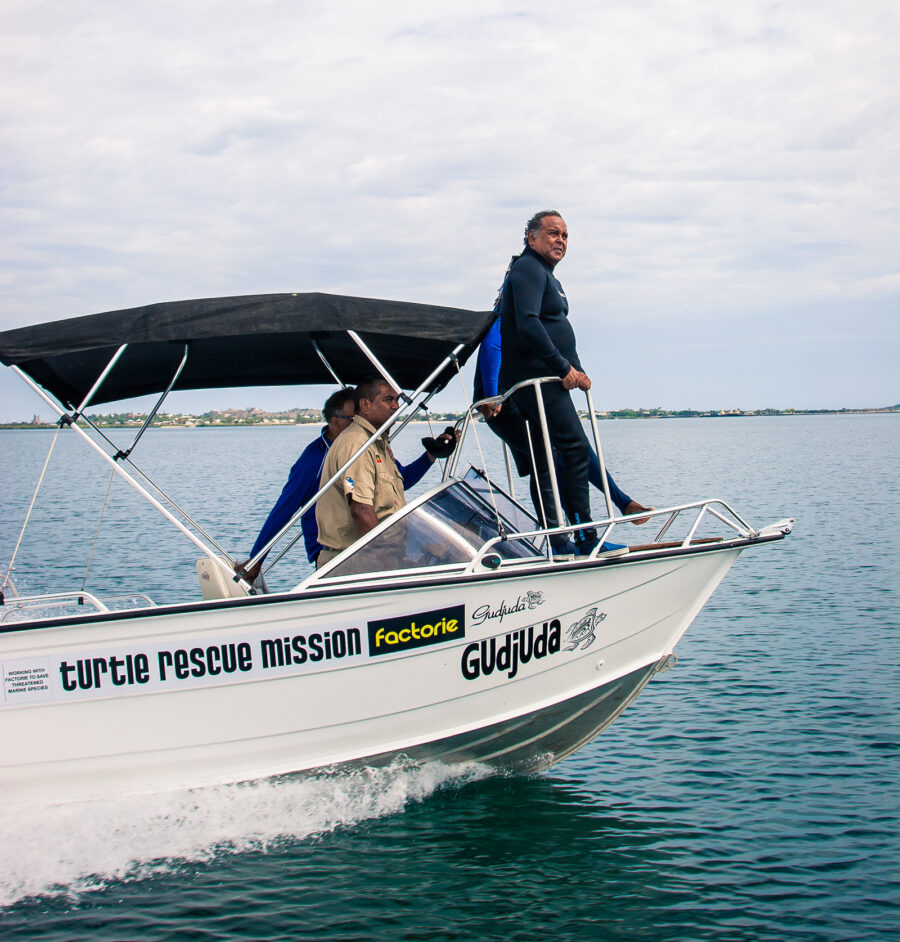 At an energetic 68 years old, the Gudjuda Reference Group ranger describes the rush of strategically launching at a sea turtle’s shell, on the crystal blue waters of the region’s coast, in what he calls a ‘sea turtle rodeo.’

It’s an activity he’s honed through years of experience on land and in the water, drawing on knowledge and an understanding of the local marine environment that’s tens of thousands of years old.

“What I love doing most is the ‘turtle rodeo,’ and I’ve been doing it for thirty-odd years,” says Jim from the office of the Gudjuda Reference Group at the Home Hill Showgrounds.

“If you ever want a hit of adrenaline, try to jump on a turtle. You’ll get addicted to it. I think that’s what keeps me going. My brain tells me I’m eighteen; my body tells me I’m sixty-eight,” he says.

The expeditions off the coast of Bowen are part of the Gudjuda Reference Groups sea turtle conservation efforts and ranger program, in collaboration with marine biology students at James Cook University.

“We swap our traditional knowledge with their scientific knowledge,” says Jim.

Once a sea turtle has been found, it’s up to the Gudjuda rangers to catch it, bringing it onto the research vessel for tagging and data collection and measuring before it’s released back into the ocean.

“We record all sorts of things. It’s a long tail for male and a short tail for female. When the eggs are hatching, if they’re really hot, they’ll be female, and when it’s cool, they’re male. I always say hot chicks and cool dudes,” he says.

Jim grew up in a small community in Bowen, able to learn from his elder’s knowledge and traditional customs he’s been able to pass down to future generations in the Burdekin.

“I was lucky enough to be able to sit back with my elders back in the day, and they taught me and passed things on to me. The smoking ceremony was passed down to me, and only people who have been showing by elders can do the smoking,” says Jim.

He’s a recognisable face throughout the Burdekin, but many might not know that in his youth, Jim served in the Royal Australian Navy, transporting troops to Vietnam on the HMAS Sydney.
“An old fella said to me once, what are you doing up here? I said, ‘I’m serving my country,’ and he said, ‘no, you’ve got to go home to your country. Where’s your home? I said, ‘Bowen.’ He said, ‘you’ve got to go home, look after country over there,’ says Jim.

In Bowen, he eventually became involved in marine conservation efforts with the Marine Park Rangers at Airlie Beach working to protect marine life in the Whitsunday Islands.

Now, he works as a senior ranger with the Gudjuda Reference Group in Home Hill, of which he’s been a board member for over twenty years.

“We do everything, working on country, natural resource management, fire with traditional burnings. We regenerate areas with natives and have a lot of partnerships. To do anything, you need partners,” says Jim.

He’s also involved in mentoring local indigenous youth, passionate about passing on the knowledge his elders gave to him, working with schools or conducting smoking ceremonies to educate and pass on aspects of Juru culture throughout the region.

“It’s about trying to show the wider community aboriginal and Torres Strait Islander customs and our heritage,” says Jim.

“Some of this stuff you’ll never learn at university. That’s the best thing about growing up an Aboriginal person. You have real experience passed down by elders.”