Bragging rights, and a suitably shaped trophy, have both been taken home by Tully’s Stuart Gilbert after a gruelling battle in the heat. 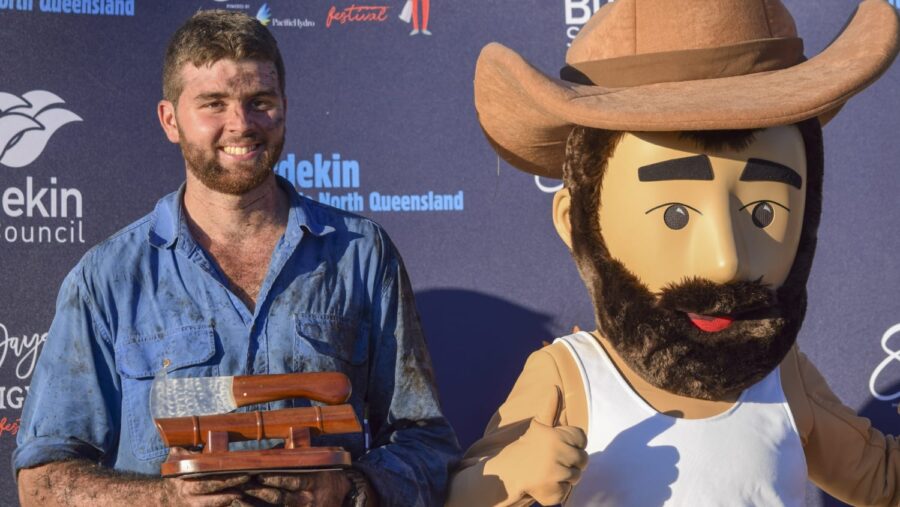 Gilbert, whose family has a longstanding association with the top three spots in the annual Australian Hand Cane Cutting Championships, was grateful for the chance to lift the silverware high after an all-day battle in wearying conditions.

With family and friends cheering him on from the sidelines, Gilbert crushed his way through his section of cane to get the better of five other competitors in the finals, including family members Adam and Keith.

Gilbert finished up in the finals with a time of 28 minutes and nine seconds, a far cry from his attempts in previous years in which he featured in the novice cup and was a runner up to brother Adam’s three championship wins.

A slow start left Gilbert lingering behind Adam and another veteran competitor in Tony Felesina, but the Tully based banana farmer found himself lurching into the lead late on with a strong push through the back half of the finals.

The taxing, blistering work continued at pace until it was all but wrapped up, with an exhausted field of competitors sharing a few handshakes and words of encouragement.

“I’m feeling pretty good about it all, it’s a hell of a long way to come down from Tully, so it felt really good to make it all worth it,” Mr Gilbert said following the win.

“It’s definitely worth it and it’s not just the trophy or the prize, I get all the bragging rights for the year as well.”

Adam Gilbert held his own in the 35s – 55s category, taking out a win there, while 71-year-old Bill Matthews had a strong showing in the over 55s category as a first time competitor, taking the trophy home to Proserpine after a fast and efficient showing with the cane knife.

Stuart Gilbert was the winner in both the under 35s age range and the overall grand finalist, thanking friends and family, and his day-trade as a banana and cane farmer in Tully, for preparing him.

“Cane and bananas are our trade, it’s pretty physical, so it’s been good preparation for this competition day-after-day,” Mr Gilbert said.

“It was pretty normal in the lead-up, there was a lot of hoping it all came together on the day and thankfully, it did.”

Although the preparation may not have been out of the ordinary, the atmosphere was something special, with over 6,000 people arriving over the course of the three day event, and a committed crowd of onlookers cheering on the cane-cutters as they battled each other and the heat.

“It’s always really good to be a part of that,” Mr Gilbert said.
“Myself and the whole family are always looking forward to this every year, so it’s always good to see just how many people are coming out and looking to get involved.

“Having the family there cheering me on is probably what got me over the line, to be honest, they really pushed me and it’s always good to have their support, especially with that big drive down from Tully.”