A condemned grandstand is causing all sorts of headaches for the Home Hill State High School P&C, with the organisation rallying around a fundraiser and hoping to see a new seating area built. 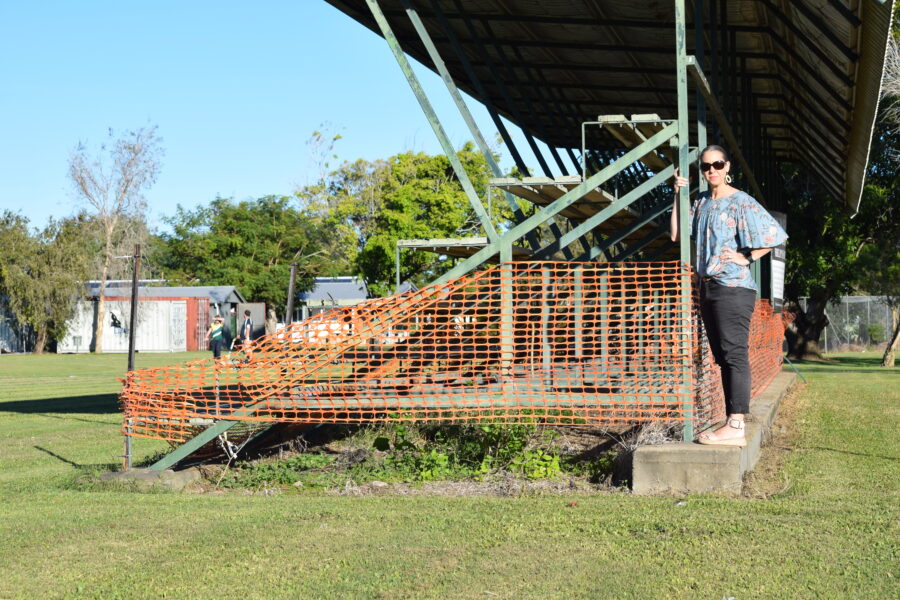 The grandstand sits on the high school’s sporting grounds and, used previously for several sporting events and community-wide events like Christmas Carols and the annual Town of Origin games played during the Harvest festival, is currently cordoned off.

P&C President Christine Loizou says the organisation reached out to the Education Department and the Queensland State Government for advice on how to proceed and were told that removing the dilapidated seating alone would cost $18,000.

“It’s quite an old piece of equipment, and it’s full of rust, so it was deemed unfit for use by students or any patrons,” Ms Loizou said.

“We’re really keen to have it removed and replaced, but we’re faced with this question of having to fundraise the money to do that.”

While the P&C have since approached the department about using a School Subsidy Scheme grant to help fund the removal, a quarter of the overall funds would still have to be raised by the P&C before the project is even considered.

“There wouldn’t be a replacement included in that, after a year of COVID, who has those kinds of funds? We’re doing everything we can as a school community to fundraise, but it’s a big task.”

Students and other groups from the school’s history have already begun their fundraising efforts intending to contribute, and those who donate $250 or $500 will even have their names carved into the new grandstand’s seat of donors when erected.

“We’re a passionate school and community, and I do know that when we need things, the community does come together and help out; we have past students and past teachers who’ve shown up willing to help,” Mrs Loizou said.

“Everyone’s finding it tough at the moment to donate funds, and it’s very difficult right now.”

In place of the P&C’s usual annual fete, they’ll instead be hosting a State of Origin 3 community event at the school, with funds raised going towards the grandstand project.

In addition, direct donations over $2 to the Grandstand Fund are tax-deductible, with those who donate over $250 having their name included on the grandstand during construction.

But Mrs Loizou is hoping that the community will contribute whatever they can when they can.

“Ten dollars can go a long way, we’re not asking for hundreds, it’d be great, especially from some of the larger businesses, if they could help us out, that’d be fantastic, but something as little as ten dollars for a donation can really go a long way,” Mrs Loizou said.

CONNECT NOW: To get in touch with organisers or arrange to donate, you can phone 4790 5666 or e-mail admin@homehillshs.eq.edu.au.