From humble origins in 1971, the group has grown into a flourishing arts community and an exemplar icon of arts and culture in Ayr. 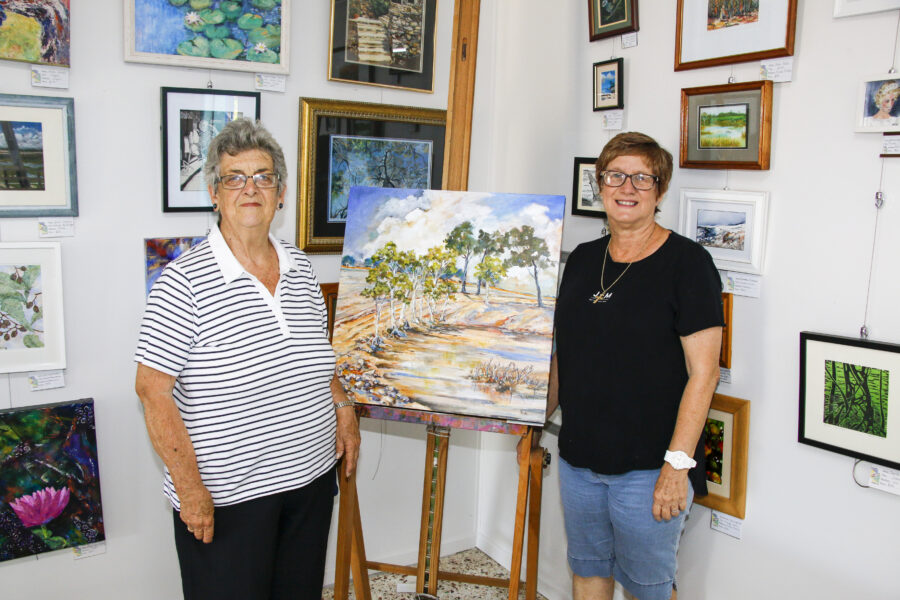 Life Member of the Burdekin Art Society, June Pola remembers when she first arrived in Ayr with her husband from Winton, Queensland, joining the group of artists in 1978.

From humble origins in 1971, the group had grown into a flourishing arts community and fifty years later has continued to be an exemplar icon of arts and culture in Ayr.

The vice-president of the club sits with the other ladies of the society within their current headquarters, a colourful building located on Macmillan Street, as they plan for their fifty-year anniversary exhibition and celebration on Saturday, August 28.

Dozens of paintings from members adorn the walls.

“It was quite a thriving art society in the Burdekin when I came, and I became more and more absorbed into it,” explained June.

“I used to paint in Winton with the Royal Flying Art School up there. It had just started, and there was quite a good little hub of artists in Winton.”

She said that during her years as a nursing sister and as a mother of four young children, there wasn’t much time to paint but that she would always attend the Burdekin Art Society meetings, becoming more absorbed in art-making.

The ladies explained that the society was started by Cecilia Spotiswood on the 1st September 1971, a well-known local who ran a florist shop on Queen Street.

“She wasn’t really an artist, but she was always interested in art. She would hold floral art classes,” said June.

“She would hold the classes in her space underneath Populin’s Hall,” added society member and exhibition coordinator Coral Colquhoun.

Coral explained that since the society’s inception, they’ve held workshops and seminars from visiting artists, conducted field trips and have held an art exhibition every year.

“The first exhibition was held in Mrs Spotiswood’s house, and they got an artist down from Townsville to judge it and another to be the guest speaker,” said Coral.

“They commented on the quality of the work that was well beyond the societies years of experience.”

The Art Society has had many homes since that first event, moving to space at 1 Queen Street, before moving between Mrs Spotiswood’s home and the Queensland Country Women’s Association’s hostel, the Memorial Hall in Home Hill and finally, their current space, acquired in 2015.

“We’re a very busy society, and we do a lot in the community,” said June.

“Members do Meals on Wheels once a month, we support various high schools with donations for their awards and judge the art eisteddfod.”

Society members also assist with the set painting every year for the Burdekin Singers and Theatre Company’s main production, and their annual exhibition regularly coincides as an added attraction to the Ayr Water Festival.

The exhibition and competitive art show will be a little different this year, acknowledging and celebrating the fifty-year anniversary at the Show’s opening in the theatre, Saturday, August 28.

June said that she’s proud of how far the Society has come over the years.

“So many people have become friends for life after joining the society, and we’ve always helped each other grow and get better,” said June.

Connect Now:
The Burdekin Art Society’s 50th Anniversary exhibition will run in the Burdekin Theatre foyer and courtyard from 7:00 pm Saturday, August 28 to September 4. Winners of the competition will be announced on opening night.