A breast cancer survivor and breast screening advocate is sharing her story while on the road through regional Australia. 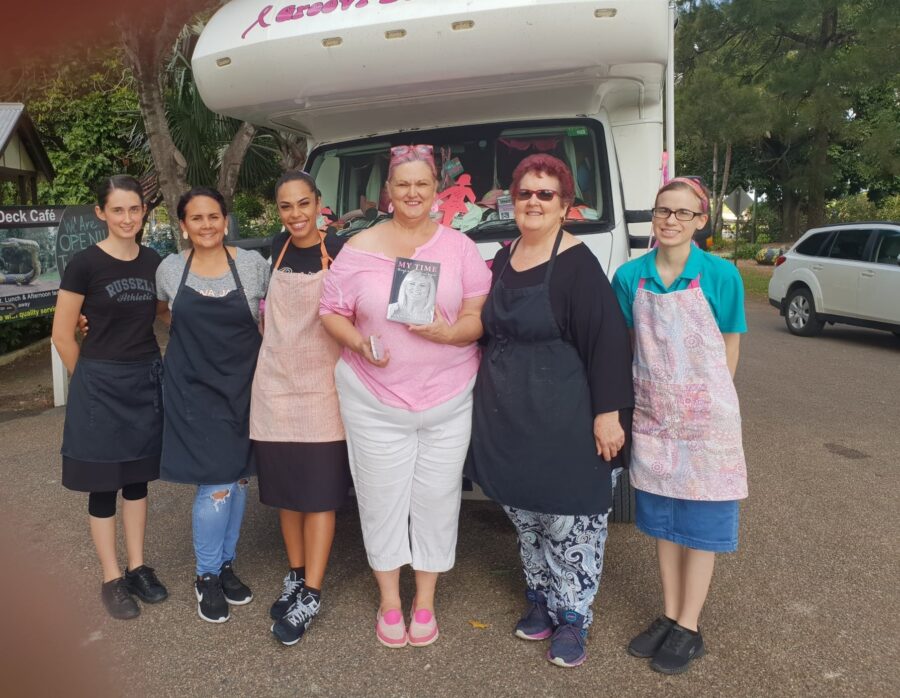 A Groovy Booby Bus swung through Ayr in a flash of pink this week, driven by breast cancer survivor, author and advocate Donna Falconer during her six-month road trip around Australia.

The trip is part of Donna’s advocacy mission, as she stops in towns throughout regional Australia to spread awareness about breast cancer, leaving in her wake an important message, an infectious energy and iced pink biscuits shaped like breasts.

While on the road, she’s stopping with locals to discuss the importance of breast checks and early detection, recently paying a visit to the Gudjuda Deck Cafe in Ayr.

She’s also selling her book, My time through breast cancer and beyond, with money raised contributing to the Breast Cancer Network Australia and the McGrath Foundation.

“I get out and raise awareness because it’s a conversation that saved my life and made me go get screened for breast cancer,” says Donna.

“I wrote my book hoping that people would read it and it would encourage them to get a breast screen and hopefully save their life as well.”

Back in 2009, despite being awarded a local Woman of the Year award for her volunteer work with breast cancer survivors, the Dubbo local realised she had never had a breast screen herself.

When friends and family urged her to get tested, she could never have anticipated a positive result but was diagnosed with stage three breast cancer.

“My thoughts were, I’m 44, I’ve breastfed three children, I have no family history of breast cancer and I don’t have the time,” she says.

“I was just blown away. It was a total shock. I thought this can’t be true. Like anyone who’s been through it, it’s a very hard journey to go through.”

Donna says there were no signs of the disease and seemingly no reason for concern when the returned scan revealed that she had breast cancer.

“Only one in 10 diagnoses’ are because of family history. It really doesn’t discriminate on age, sex, colour, health. It can happen to anyone, including 170 Australian men this year,” she says.

Donna says that when she was finally declared cancer-free, she was inspired to hit the road with her message, creating the unmissable Groovy Booby Bus.

“I had a bit of a midlife crisis, and I decided life was too short, and I sold my house, threw in my job and bought an RV. I’m totally self-funded. It’s all about spreading awareness.

“I’ve had the RV for seven years now and done a lot of trips through regional NSW. I’ve been to Uluru, South Australia and a Melbourne trip down the Great Ocean Road.

With her friend Viv Dawe, she’s travelling from Ayr to Cairns and Darwin and to Broome before heading South to Perth before returning to Dubbo.

“Every day, we just stop when we feel like it, we don’t have set plans when we’re gonna stop. It’s about hopefully saving a life or two by saying it really can happen to anyone.”