Faces of the Burdekin: Mickey McKellar

As a child growing up in Ayr in the 1950s, Mickey McKellar was told she would never stand unaided, much less run several hospitality businesses beloved by thousands of people. 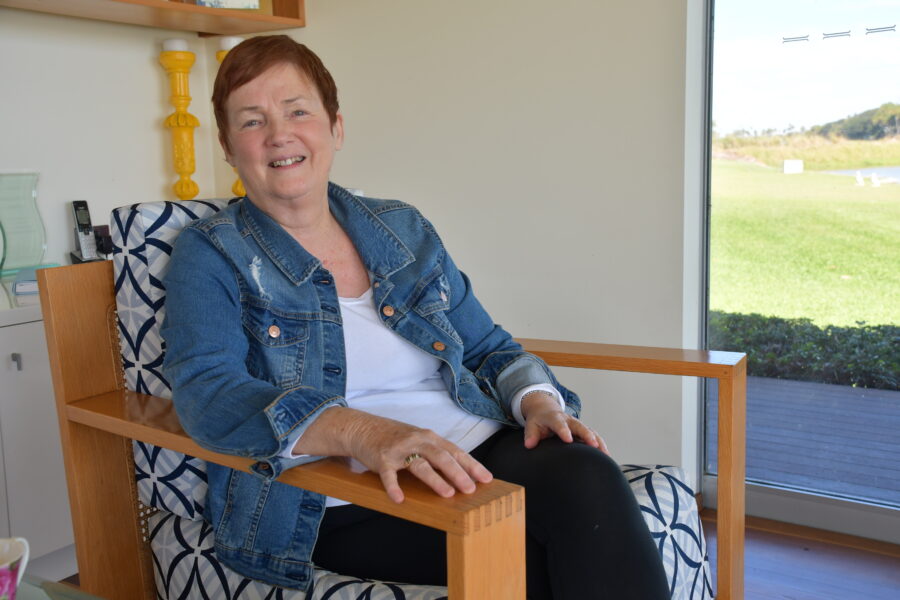 Born Veronica Mary Short, the iconic Burdekin figurehead nicknamed ‘Mickey’ by her father, was diagnosed with polio at just ten months old, a disease that would require years of rehabilitation and remain a reminder of her resilience for years to come.

The tenacious ex-publican reflects on her life from her open-air sitting room with husband Bill, overlooking the expanse of green and the scenic lagoon that envelopes the property.

“I was told I wouldn’t be able to stand on my feet and that I’d probably need a wheelchair,” says Mickey.

“I think it does make you more resilient. Things only become negative in life if you allow them to be. Those experiences never really leave you,” says Mickey, who spent a year of rehabilitation at the Xavier Home for Crippled Children when she was just six years old.

“These life experiences mould you, and there’s no greater teacher. Reflection and acknowledging your history is a good thing,” she says.

The now 74-year-old met husband Bill, originally from Augathella in Queensland, while he was playing rugby league in Ayr in 1965, kicking off what would soon be a lifelong relationship and thriving business partnership.

The pair eventually moved to Goondiwindi, where Bill worked with Cooper Australia in the agricultural industry before moving to Brisbane and Toowoomba.

It’s here that the opportunity to lease and operate an old pub on the highway near East Greenmount presented itself and Bill and Mickey leapt at the chance, their then four children in tow.

“I’d always had this hankering for the hospitality business. I wasn’t a drinker, I wasn’t a smoker, but I just loved, I think, the connection with people, and I just loved the idea of owning a pub,” says Mickey.

“Growing up here, my family was familiar with the Sexton’s who had the Kalamia Hotel. So I’d spent a lot of time there and had this real fascination with pub life.”

She says that when the family first moved into the property and started running the venue, she’d never even stepped foot behind a bar.

“It was challenging, but always enjoyable. It was an eye-opener. I didn’t even know how to pull a beer.

“The Wheatsheaf Hotel, whilst it looked charming from the outside, could be far from charming when you lived there. It was near the New England highway, and my hair would blow on the pillow at night because the wind would whistle through the old building,” she laughs.

The pair eventually moved to Clifton, where they purchased and re-painted the Clifton Hotel, still recognised for the pink exterior they chose.

After four years running the venue, they moved back up North, assisting the Coutts family with one of their pubs in Townsville before purchasing the iconic Queens Hotel in 1990.

The McKellars quickly became well known in town, building and adding the upstairs area to the popular Queen Street venue and the cafe and brasserie.

They became involved in events like the Water Festival, setting up the International Food Fair on the main street and creating huge fundraisers, the first of which raised $36,500 for Ronald McDonald House.

“We did a lot of things like that. If you’re taking from a community, you need to be able to give back to the community,” says Mickey.

She reflects on the locals that made the job worthwhile and her ingenuity, making the business a beloved hub in the community.

“You meet some characters; you really do. We loved the life,” says Mickey.

“There used to be a group of regulars who’d come in every Sunday morning. They were all men, and most of them were single. They started talking about their bread-making machines, so I introduced a bread-making competition among these fellows.

“They would trot in with their loaves of the bread, and I was the judge. It was things like that. You could have a lot of fun,” she says.

When the Mckellar’s sold the Queens for retirement in 2006, Mickey turned to a new passion, rediscovering her love of reading and establishing the Burdekin Readers and Writers Association.

From here, it’s her exuberant and proactive nature that spawned the first Burdekin Readers and Writers Festival in 2014, a multi-day event that’s become iconic in the region, drawing authors from all over Australia.

As a passionate reader and writer, she plans to write a book one day detailing her early experiences with polio and her life running pubs.

“I might call it my life behind bars,” she laughs, considering a title for her life story.

When asked what drives her productivity and passion for the community, Mickey’s husband Bill chimes in.

“The best way to sum her up is she’s got an arrestive spirit. She’s never still or silent or submissive,” says Bill.

“Something I know only too well!”