93-years-young Betty Stubbs was surprised for her birthday this week with a ride down memory lane in a 1929 Dodge, one year her junior. 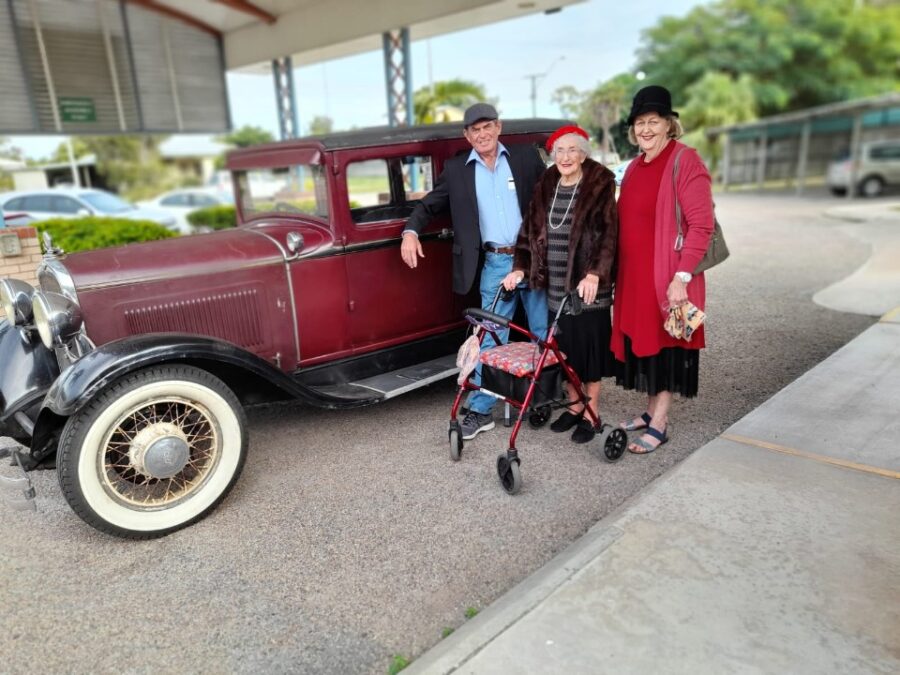 Glamorously dressed in a fur coat and dashing red beret, Betty, who has early-onset dementia, was brought outside her home at Regis aged care in Home Hill, where she was greeted by son Dennis and daughter-in-law Isabel Stubbs.

Accompanying them was Phil Richards, the owner of the car, who was more than happy to take Betty for a spin, lending the vintage vehicle for the occasion.

“Our friends had the car, and we just thought it would be a good idea for a birthday surprise for mum. Isabel had found her some period clothes and got her all dressed up,” said Betty’s son Dennis.

“We brought mum out, and quite a few of the residents came out to look on and cheer. We took her for a nice drive around Home Hill and through the cane paddocks,” he said.

The Dodge still has its original red paint and has even been used to film Baz Luhrmann’s 2008 period film Australia.

Dennis says that seeing the car was a nostalgic moment for his mother.

“She was very happy with it. Getting dressed up was fun for her, and she really did feel special for the day.

The first car that her family had was a 1936 Chevy. They didn’t have a lot of cars back then. For a while, it was just horse and buggy.

“We do still talk about the past. Mum used to work on the family farm and can still remember the draught horses.”

Betty Stubbs was born June 12th in Mildura in 1928, before growing up on a soldier settlement farm in Walpeup, Victoria and then a fruit shop.

“Her father was a Gallipoli veteran,” says Dennis.

As Betty grew up, she worked in the fruit shop before trying her hand at hairdressing and eventually pursuing nursing.

“She was a nurse and also a midwife. You had to stand to attention when the matron walked in back in those days, not like now.

When Betty married Ron Stubbs, the pair moved to a banana farm in Crabbes Creek, New South Wales, before opening a fish and chip shop in Brisbane with their six children.

After Betty’s drive, the Stubbs stopped for a morning tea with grandson Toby and great-granddaughter Harlow.

“The day was fantastic, it was lovely to do something for mum, and she did have a sparkle in her eye.”