One of the most stately and beautiful buildings of its kind has been entered into the Queensland Heritage Register. 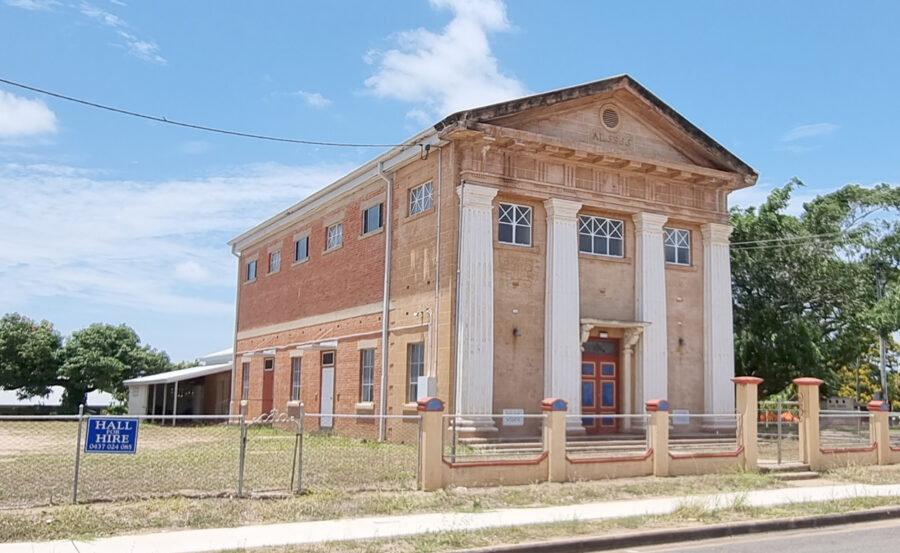 Ayr’s imposing two-storey Masonic Temple, on the corner of Mackenzie and Macmillan streets, built on land obtained by the Freemasons for £30 in 1903. (Image © Queensland Government.)

The Ayr Masonic Temple, described at the time of its opening as “one of the most stately and beautiful buildings of its kind in Queensland”, has been entered into the Queensland Heritage Register.

Built in 1935, the Queensland Heritage Council (QHC) entered the Ayr Masonic Temple into the register on 25 February 2022.

The temple was described as one of the more impressive temples built in Queensland in the interwar period, an interesting feat given Ayr’s relatively small population at the time.

The earlier hall survived Cyclone Leonetta in 1903, which had levelled most of Ayr and Brandon. It was replaced 32 years later when it could no longer accommodate the town’s three Masonic Lodges.

Ms Shirreffs said the Ayr Masonic Temple was a beautiful building featuring a well-composed and prominent temple-front and high-quality design and construction.

“The temple’s overall features have remained relatively unchanged over the years, and it retains its aesthetic significance as a highly intact masonry building in an impressive ‘Interwar Classical’ architectural style.”

The foundation stone for the Ayr Masonic Temple was laid on 9 December 1934. The opening on 22 June 1935 was attended by Masons from across Queensland.

The application to enter the Ayr Masonic Temple into the register was made by a member of the public.

Places entered into the Queensland Heritage Register are protected under the state’s heritage legislation, ensuring they are maintained and retained for future generations.

Further information on the Ayr Masonic Temple is available at https://apps.des.qld.gov.au/heritage-register/detail/?id=650273.